Germany’s two major political parties have just agreed to form a grand coalition, deciding for the first time on a countrywide minimum wage of 8.50 Euro per hour. This was one of the issues pushed through by the Social Democrats in the new coalition.

The sad truth is that many employees in the services sector are currently earning a lot less. Many have been forced to apply, in addition to their low income, for a social welfare subsidy to pay the rent.

The state, or taxpayer, has indirectly been subsidizing these lower paid jobs. It is one of the downsides of the German economic boom. German corporations are earning huge profits with their emphasis on exports. Domestic demand on the other hand has been stagnating at a low level for many years because the available income of middle class and lower income groups has been declining. This has largely been due to low wage increases coupled with high medical aid, tax and other social welfare fees.

The background to such a development, not only in Germany, has been a dramatic shift in the value system: Greed has taken over. We saw the worst outgrowths of this in the banking crisis that came to a head in 2008 and that is not over yet, by far. The positive side to the story is that all the muck came to the fore. The story was out in full glare. We could finally read how customers were literally “robbed” with junk products so that bankers could cash in on their annual bonuses running into millions – in some extreme cases.

Words are telling. The person responsible for staff issues is called the head of “Human Resources” as if humans can be put on the same level as material resources such as technical equipment. In the same way the customer is not seen as a human being but as a “product” that needs to be milked in every way possible and can be treated with complete disrespect. When was the last time you actually got hold of a human being on the other end of the line when trying to phone a telecommunications or other big service company? You are inevitably left waiting, listening to a computer voice and being forced to listen to horrible music while you are at it. Watch how a company treats its employees and you will find that it will be treating its customers in the same way.

During the past ten years there has been a dramatic increase of burnout and other psychological disorders among employees in Germany. This had the German Labour Ministry so worried that they have commissioned an annual study on stress and related matters.

One of the issues that regularly comes up is the lack of human leadership skills, empathy, inability or unwillingness on the part of managers to praise their employees for work well done. It is one of the key factors employees list as to why they feel dissatisfied or emotionally exhausted in their jobs. Bosses have been appointing bosses of their own kind with a complete lack of social skills.

People have needs. They are social beings who interact, communicate, laugh and especially enjoy being in a team where basic human respect and recognition is the norm. People want to earn a decent wage to be able to afford basic needs but they also want to go to a job every day where they feel they can contribute to something meaningful and meet up with friends at work who are there to also support them during the natural cycles of ups-and-downs in life.

And, more importantly, they want a boss who leads by example and is a mentor in honing personal skills. He is also the person who can show genuine empathy when a child is sick at home and remembers every birthday and anniversary – like a good friend. It is not too much to expect. People simply want to be treated like humans and not like a human resource that can be extracted, manipulated and discarded.

More info in my book on the cycles of change and value systems: Yield and Overcome

Venice is undoubtedly one of the world’s most beautiful cities. Walking these ancient streets and squares one cannot but be astounded by the architectural masterpieces built by the Venetians over the centuries.

The Basilica of San Marco overlooks one of the most beautiful squares in the world. It is the main tourist attraction and a favourite backdrop to many a movie. Unforgettable the scene from “Moonraker”: After being pursued by Drax’s henchmen down the canals in Venice, James Bond approaches St. Marks Square on a gondola. He activates a skirt on the boat, turning it into a hovercraft that allows him to travel on the square to the astonishment of everyone around. 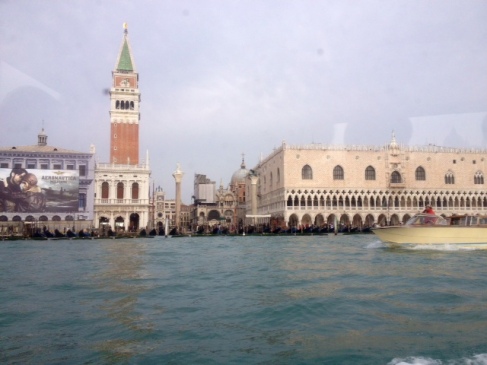 But St. Marks Square is only one of the many wonders to be admired here. Looking across from St. Marks Square is the magnificent baroque Basilica of St. Mary of Health (Basilica di Santa Maria della Salute), a huge, domed church built on a spit between St. Mark’s Basin and the Grand Canal. It was founded in 1630 as a tribute to the Virgin Mary and took 57 years to complete. It was built as a tribute to the Virgin Mary for freeing the city from the plague. And every year on November 21 the locals pay tribute to her, praying for good health.

Venice is literally built on water and the people have learned to live with regular floods. But in recent years the frequency of those floods has increased. Last year the city was flooded several times. A group of mobile flood barriers have been constructed at the entrance to the Venice lagoon in a project started ten years ago and scheduled to be completed in 2015. http://goo.gl/axO9rb

Will it be enough?

The city once boasted several hundred thousand local inhabitants. Now it is just over 50,000. It is not only the high property prices but the cost and discomfort of having to protect your house against the flood waters that is driving the people away. The first exodus began after the catastrophic flood of November 1966 that virtually submerged the city. At the same time more than 20 million tourists came to the city every year. As a major generator of tourist income the city is worth protecting.

Meanwhile another United Nations Climate Conference is taking place in Poland of all places. The country has shown little inclination in the past to do anything about curbing carbon dioxide emissions from its coal-fired power stations. To the contrary it is taking the tack of many climate change sceptics. The outcome of this conference is predictable. Too little is being done too late and the longer we wait, the more difficult it is going to get to save cities like Venice and many low-lying island nations.

There seems to be a parallel between the denial ism in the climate debate and personal health. It is beyond doubt that smoking, junk food and lack of exercise will shorten your life. But the human being seems incapable of relating such information to the future. “So what, as long as I can enjoy my Bic Mac in front of the TV now…”

In the same way we ignore the warnings from climate scientists that if we don’t radically reduce emissions we are going to have a very hot and uncomfortable planet by the end of this century. We are playing roulette with ourselves and the future of our children. Its time to wake up!