The magnificent churches and cathedrals along the Camino are shrouded in mystery and legend. Overlooking  the town of Estella is an impressive modern Basilica. It is built on the hilltop where in 1085 shepherds were attracted by a cluster of stars. Hidden in a cave they found the image of the Virgin Mary. First of all a chapel was built, and then a Baroque church and finally in 1951 a star-shaped basilica recreating the intense light effect that was produced when the carving was discovered. In the interior a 14th-century Gothic image of the Virgin of the Puy from the 14th century is conserved. 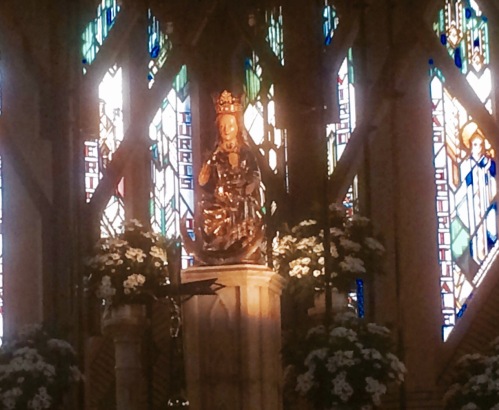 After leaving Estella on a beautiful meandering path, Alyce walks ahead to the village of Villamayor. She finds the church open. An elderly man, who looks like a priest, appears from nowhere, asking her to come over. He showers her with blessings and prayers of protection, grabbing her by her shoulders and giving her a long hug. Alyce feels this wave of energy coming her way. What we don’t know at that time is that our friend from the US, Jim, met the same man at the same place only a few minutes earlier. He gives Jim a match to light a candle before a silver processional cross. Jim is at that moment overwhelmed by a truly spiritual experience, momentarily falling to his knees. That evening Alyce and Jim share their experiences with me, still moved by the encounter. But the next day we meet the man who runs the Albergue in Villamayor. He tells us he knows of no old man or priest in the village. The church is in fact mostly locked with the pilgrims often complaining about this. The real priest is in fact a young man. So who was the stranger giving blessings to the passing pilgrims?